Lilium Origin: Northern hemisphere. Flower colour: various colours. Flowering period: June - August Average plant height: 70 - 100 cm. Planting depth to base of bulbs:15 cm. Spacing between flower bulbs: 20 cm. Light requirements: partly shade during the day is no problem. It is to be advised to shade the lower part of the plant, lilies like 'cold feet'. (PM sun) Landscape uses: border, perennial garden and pots and containers. When lilies feel "at home" they even naturalise in the garden. History: In China and Japan, they have appeared on the dining table for a thousand years. On the island of Santorini, ceramics have been found bearing virtually the same images of lilies that are found on the ceramics of the ancient Minoan culture of Crete. There are scholars who see these Minoan ceramics as remains of the famous Atlantis. Yet older than the Minoan culture, which disappeared 3,500 years ago, is the Hebrew word for lily, "shusan." Without question, the lily is a flower with a history stretching back to the beginning of time. Lilies for planting in the garden and for cut use as flowers, come in all sorts. The three best known groups are: Lilium longiflorum, more commonly known as Easter Lilies, have classic white trumpet-shaped flowers and a heavenly scent. Asiatic lilies with their straight stems, high bud count and generally brightly spotted blossoms, vary in shape from simple open bowis to flowers with exquisitely recurved petals. Colours of Asiatic lilies range from the softest pastels to fiery reds and oranges that practically ignite when the sun shines on them, Oriental lilies, known as the most flamboyant personalities within the world of lilies, are characterised by their immense flowers, intense fragrance and rich colours. Unfortunately, wild species - the kind that still occur growing in the wild and which have not yet been affected by hybridisation - are not too commonly available for garden use. This is a shame, since these are the very species that are so appropriate for the garden. It is not difficult to see that the assortment is being completely fiooded with hybrids, with the Orientals and Asiatics in particular being the undisputed leaders.

Principal varieties The Royal Horticultural Society and the North American Lily Society have classified lilies as follows: Group 1- Asiatic hybrids Asiatic hybrids were once known as "Mid-Century" hybrids because they were developed around the mid-point of this century by hybridizer Jan de Graaff of Oregon. Mr. de Graaff devoted his life to lily hybridization and was one of the most accomplished practitioners of that art the world has known. "Enchantment,' his first of the mid-century hybrids was the first lily to feature erect flowers. This characteristic revolutionized the use of lilies in the cut flower industry.Gardeners also have Mr. de Graaff to thank as pioneer of today's easy-to-grow garden lilies. By the 1980s, the category of Mid- Century hybrids had grown so large that the name was changed to Asiatic. Plant in late spring, 10 - 12 cm deep. Roots develop along the stem. These are mid-century hybrids I by. raised by Jan de Graaff in Oregon. Mr. de Graaff spent most of his life working with lilies and is the best-known lily hybridizer in the world. One of his goals was to make lilies easy to grow for the gardener. Group 2 - Turk's cap Hybrids of Lilium Martagon and L. Hansonii raised in Holland by van Tubergen. Turk's cap are woodland plants. They like the shade. Group 3 - Includes hybrids of Lilium candidum, the madonna lily Group 4 - Hybrids of native North American lilies, mostly progenies of tall-growing Lilium Parryi and Lilium pardalinum. Flowers are reflexed, which means that the petals curve back. Group 5 - Lilium Longiflorum The white Easter lily commonly forced for spring bloom. In nature it blooms mid-summer. Group 6 - Trumpet lilies, derived from Asiatic species The Aurelia and Olympic hybrids are part of this group. Some have pendant flowers. Group 7 - Oriental hybrids Mostly derived from Lilium auratum and Lilium speciosum. Flowers are usually large and shaped like bowls. Very fragrant. Group 8 - 0.T. Crossings Oriental, Trumpets and Miscellaneous. 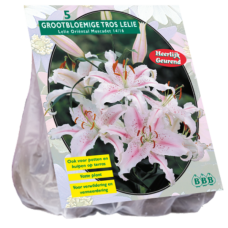 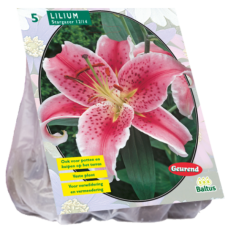 Lilium Stargazer, Lily, 5 pcBeautiful, strong lilies that last for years. Up to 20 flowers per stem!.. 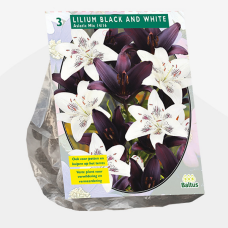 Lilium 'Black and White' per 3Beautiful, strong lilies that last for years. Very suitable for pots a.. 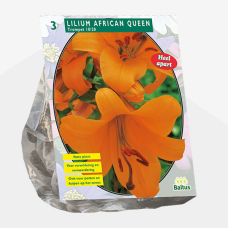 Lilium African Queen per 3, Trumpet Lily.Beautiful, strong lilies that last for years. Up to 20.. 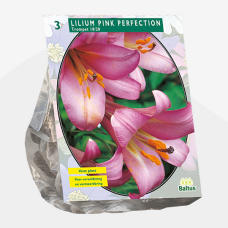 Lilium 'Pink Perfection' per 3, Trumpet LilyBeautiful, strong lilies that last for years. Up to.. 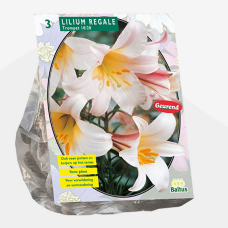 Lilium Regale per 3,  Trumpet LilyBeautiful, strong lilies that last for years. Up to 20 f.. 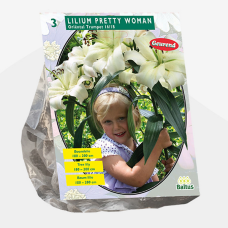 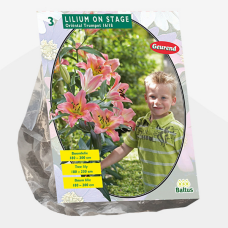 Lilium 'On Stage'. Lilium On Stage (Tree Lily) per 3. O.T. Lily.Beautiful tree lily with a wond.. 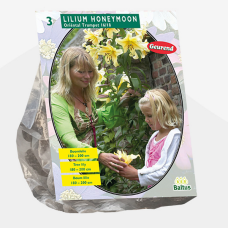 Lilium Honeymoon (Tree Lily) per 3, O.T. Lily.Beautiful tree lily with a wonderful scent. Up to 30 f.. 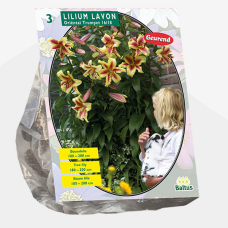 Lilium Lavon (Tree Lily) per 3, O.T. Lily.Beautiful tree lily with a wonderful scent. Up to 30 flowe.. 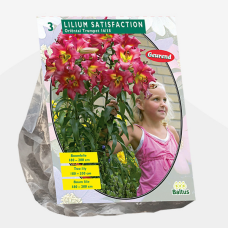 Lilium Satisfaction (Tree Lily) per 3. O.T. Lily.Beautiful tree lily with a wonderful scent. Up to 3.. 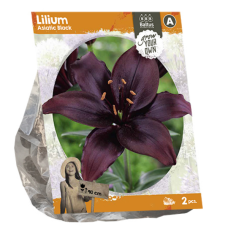 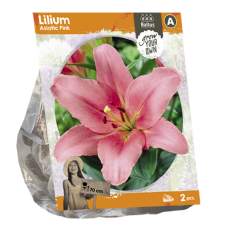 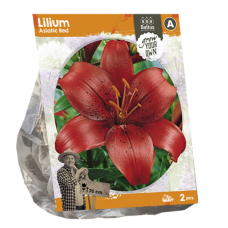 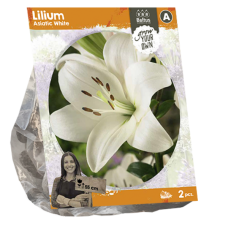 Showing 1 to 15 of 28 (2 Pages)
This site uses cookies to provide you with better expirience.
By continuing to browse the site you are agreeing to our use of cookies. Read more