Paeonia Origin: Asia, Europe and North America Flower colour: various colours (except blue) Flowering period: April - June Average plant height: 60 - 100 cm Planting depth to base of bulbs: 10 cm Spacing between bulbs: 50 cm Type of buib: shrub Light requirements: Full sun, partily shade during the day is no problem. History of the Paeonia (Peony) There are many tales as to how the Peony got its name. According to one tale the name originates from the Greek word Paeon. In Greek mythology. Paeon was the physician to the gods who angered his teacher Asclepius after he extracted a milky liquid from the root of a peony that cured Pluto. Asclepius was the god of medicine and healing. He threatened to kill Paeon out of jealousy because he was outsmarting his teacher. Zeus saved him by turning him into a beautiful flower, the peony. Peonies have been reported to have dated back to 1000BC in the gardens of China and by the eighth century, they had reached Japan who are major producers of the Peony. In the Eastern world, Peonies were mainly used for their medicinal properties. The Peony (root and seed) were frequently used to treat headache and asthma and to relieve pain associated with childbirth. More recently Peonies are used for their ornamental qualities. It wasn't until 1789 that the first tree peony came to Europe. Paeonia Facts The majority of Paeonia plants in gardens today are hybrids of original true varieties. There are around 40 species of peony that originate from Asia, Europe and North America. Paeonia Flowers can reach up to 25 cm in diameter. They are bowl-shaped and available in all colours except blue. Paeonia bloom from April to June, with coral peonies appearing first, followed by classic pink peonies in the early days of summer. The Paeonia is able to perform self-pollination. Partially cooked and sweetened petals of peony are consumed as dessert in China. Fresh petals can be consumed in the form of salad or used as a garnish for lemonade. Paeonia signifies romance, elegance, honour, wealth and abundance in the language of flowers. Paeonia is one of the most popular flowers used for the preparation of wedding bouquets. It is also official flower for 12th wedding anniversary Paeonia is the state flower of Indiana. The Paeonia is a perennial plant that can survive up to 100 years when it is cultivated under optimal conditions. TIP: How to Care For Cut Peonies The peonies bouquets will take a couple of days to start opening. If they don't open after a few days, you may find that the peony heads are covered in a sap that can hinder them from opening. To give a them little help, take the peony from the bouquet and hold head down under a tap of room temperature water to remove the sap. Cut 2-3cm off the peony stem and return to your vase to solve your problem so you can enjoy your peony at their best and let them fill your home with that fabulous scent

Plant growth habits Peony species come in two distinct growth habits, while hybrid cultivars in addition may occupy an intermediate habit. Propagation Herbaceous and Itoh peonies are propagated by root division, and sometimes by seed. Tree peonies can be propagated by grafting, division, seed, and from cuttings, although root grafting is most common commercially. Herbaceous peonies such as Paeonia lactiflora, will die back to ground level each autumn. Their stems will reappear the following spring. However tree peonies, such as Paeonia suffruticosa, are shrubbier. They produce permanent woody stems that will lose their leaves in winter but the stem itself remains intact above ground level. Herbaceous: During summer, renewal buds develop on the underground stem (the "crown"), particularly at the foot of the current season's annual shoots. These renewal buds come in various sizes. Large buds will grow into stems the following growing season, but smaller buds remain dormant. The primordia for the leaves can already be found in June, but the flower only starts differentiating in October, as the annual shoots die down, completing its development in December, when sepals, petals, stamens and pistils are all recognisable. Tree: During the summer, large buds develop at the tip of the annual growth and near its foot. In the autumn, the leaves are shed, and the new stems become woody and are perennial. Itoh (or "Intersectional"): In 1948 horticulturist Toichi Itoh from Tokyo used pollen from the yellow tree peony "Alice Harding" to fertilize the herbaceous P. lactiflora "Katoden", which resulted in a new category of peonies, the Itoh or intersectional cultivars. These are herbaceous, have leaves like tree peonies, with many large flowers from late spring to early autumn, and good peony wilt resistance. Flower types Six types of flower are generally distinguished in cultivars of herbaceous peonies. Single: a single or double row of broad petals encircle fertile stamens, carpels visible. Japanese: a single or double row of broad petals encircle somewhat broadened staminodes, may carry pollen along the edges, carpels visible. Anemone: a single or double row of broad petals encircle narrow incurved petal-like staminodes; fertile stamens are absent, carpels visible. Semi-Double: a single or double row of broad petals encircles further broad petals intermingled with stamens. Bomb: a single row of broad petals encircles a shorter dense pompon of narrower petals. Double: the flower consists of many broad petals only, including those which likely are altered stamens and carpels. 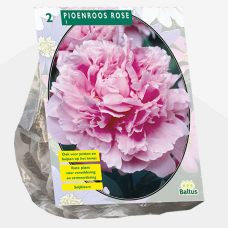 Paeonia ,Peony Pink per 2The longer it stands, the more abundantly the peony will flower. Extra larg.. 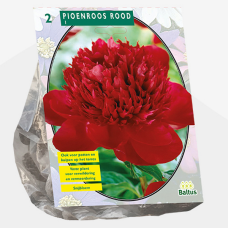 Paeonia ,Peony Red per 2The longer it stands, the more abundantly the peony will flower. Extra large.. 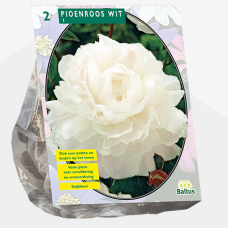 Paeonia ,Peony White per 2The longer it stands, the more abundantly the peony will flower. Extra lar.. 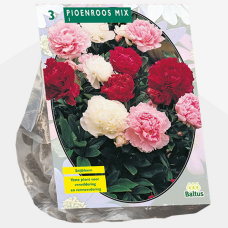 Paeonia ,Peony Mix per 3The longer it stands, the more abundantly the peony will flower. Extra large.. 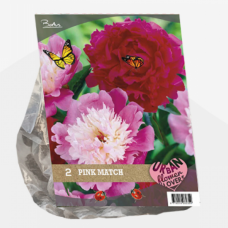 Showing 1 to 5 of 5 (1 Pages)
This site uses cookies to provide you with better expirience.
By continuing to browse the site you are agreeing to our use of cookies. Read more