Hemerocallis. Origin: Northern hemisphere Flower colour: various colours (except bright white and Blue) Flowering period: June - oktober Average plant height: 45 - 100 cm Planting depth to base of bulbs:10 cm Spacing between bulbs: 60 cm Type of bulb: clumb Light requirements: full sun, partly shade during the day is no problem. Daylilies in History Daylilies have been found growing wild for millennia throughout China, Mongolia, northern India, Korea, and Japan. There are thousand-year-old Chinese paintings showing orange daylilies that are remarkably similar to the flowers that grace modern gardens. Daylilies were first brought to North America by early European immigrants, who packed the roots along with other treasured possessions for the journey to the New World. By the early 1800s, the plant had become naturalized, and a bright orange clump of flowers was a common site in many homestead gardens. As popular as daylilies were for many hundreds of years, it was not until the late 19th century that botanists and gardeners began to experiment with hybridizing the plants. Over the next hundred years, thousands of different hybrids were developed from only a few wild varieties. In fact, most modern hybrids are descended from two types of daylily. One is Hemerocallis flava-the yellow lemon lily. The other is Hemerocallis fulva, the familiar tawny-orange daylily, also known affectionately as the "ditch lily." A daylily is a flowering plant in the genus Hemerocallis. Despite the common name, it is not in fact a lily. Gardening enthusiasts and horticulturists have long bred daylily species for their attractive flowers. Thousands of cultivars have been registered by local and international Hemerocallis societies. The name Hemerocallis comes from the Greek words (hémera)'day" and (kalos)"beautiful". Daylilies are perennial plants, whose name alludes to its flowers, which typically last about a day. The flowers of most species open in early morning and wither during the following night, possibly replaced by another one on the same scape the next day. Some species are night- blooming. Daylilies are not commonly used as cut flowers for formal flower arranging, yet they make good cut flowers otherwise, as new flowers continue to open on cut stems over several days. Hemerocallis is native to Asia, primarily eastern Asia, including China, Korea, and Japan. This genus is popular worldwide because of the showy flowers and hardiness of many kinds. There are over 80.000 registered cultivars. Hundreds of cultivars have fragrant flowers, and more scented cultivars are appearing more frequently in northern hybridization programs. Some earlier blooming cultivars rebloom later in the season, particularly if their capsules, in which seeds are developing, are removed. Despite the name, daylilies are not true lilies, although the flower has a similar shape. Before 2009, the scientific classification of daylilies put them into the family Liliaceae. Unlike daylilies, which have a fibrous root system, Liliaceae species grow from bulbs and, if ingested, are harmful to humans and animals. It is a common misconception that daylilies share the toxic properties of true lilies. Most kinds of daylilies occur as clumps, each of which has leaves, a crown, scapes, flowers, and roots. The long, linear lanceolate leaves are grouped into opposite fans with arching leaves. The crown is the small white portion between the leaves and the roots. Along the scape of some kinds of daylilies, small leafy proliferations form at nodes or in bracts. A proliferation forms roots when planted and is an exact clone of its parent plant. Many kinds of daylilies have thickened roots in which they store food and water. Although the buds and flowers are often used by humans in gourmet dishes, Hemerocallis species are toxic to cats and ingestion may be fatal. Treatment is usually successful if started before kidney failure has developed. Cultivation The daylily has been nicknamed "the perfect perennial" by gardeners, due to its brilliant colors, ability to tolerate drought and frost and to thrive in many different climate zones, and for being generally low maintenance. It is a vigorous perennial that lasts for many years in a garden, with very little care and adapts to many different soil and light conditions. Daylilies have a relatively short blooming period, depending on the type. Some will bloom in early spring while others wait until the summer or even autumn. Most daylily plants bloom for 1 through 5 weeks, although some bloom twice in one season ("rebloomers)". Hemerocallis is one of the very highly hybridized plant genera. Hybridizers register hundreds of new cultivars yearly. Hybridizers have extended the genus' color range from the yellow, orange, and pale pink of the species, through vibrant reds, purples, lavenders, greenish tones, near-black, near-white, and more. However, hybridizers have not yet been able to produce a daylily with primarily blue flowers. Flowers of some cultivars have small areas of cobalt blue. Other flower traits that hybridizers developed include height, scent, ruffled edges, contrasting "eyes" in the center of a bloom, and an illusion of glitter called "diamond dust." Sought-after improvements include foliage color, variegation, plant disease resistance, and the ability to form large, neat clumps. Hybridizers also seek to make cultivars cold-hardier by crossing evergreen and semi- evergreen plants with dormant varieties. 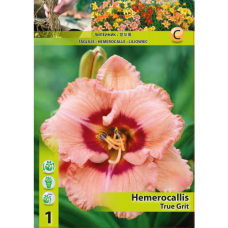 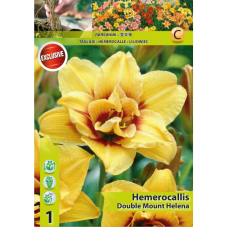 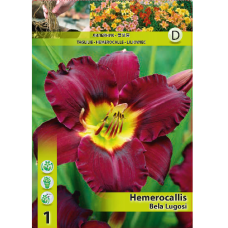 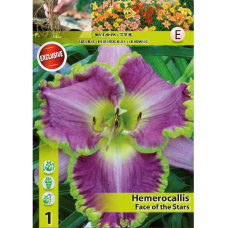 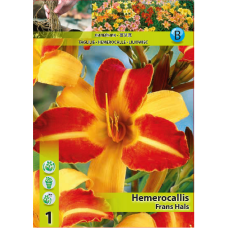 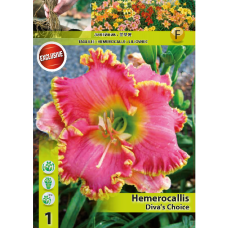 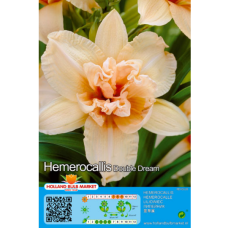 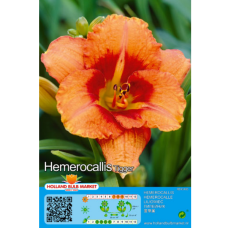 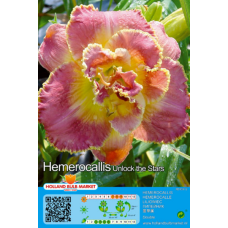 Showing 1 to 11 of 11 (1 Pages)
This site uses cookies to provide you with better expirience.
By continuing to browse the site you are agreeing to our use of cookies. Read more